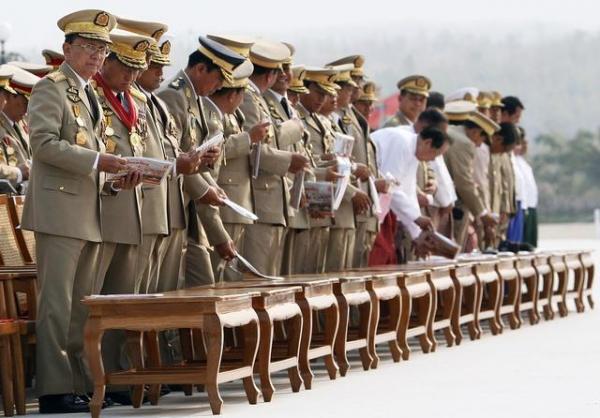 (New York) ­– Burma’s parliament should reject a proposed law that would shield former presidents from prosecution for crimes committed during their terms in office, Human Rights Watch said today.

Published in the state-run newspaper on December 21, 2015, the Former Presidents Security Bill grants immunity to former heads of state “from any prosecution for actions during his term.” Outlined in article 10, this provision would protect former presidents from domestic prosecution for even the most serious crimes committed while in office, including war crimes and crimes against humanity.

“The Former Presidents Security Bill is a brazen attempt to shoehorn immunity from prosecution into the president’s retirement package,” said Phil Robertson, deputy Asia director. “The immunity provision should be stripped from the proposed law so that President Thein Sein and future Burmese presidents remain accountable for any crimes they commit.”

The draft law consists of 14 clauses that outline the government’s commitment to support retired presidents, such as lifetime funding for a bodyguard and other personal security measures.

The bill was announced during the final parliamentary session of the current government, which reconvened shortly after the National League for Democracy’s (NLD) landslide victory in the November 8 elections. The session will continue until the end of January 2016. President Thein Sein and the ruling Union Solidarity and Development Party (USDP) have promised a smooth transition of power to the new NLD-led government. Yet the proposed provision on presidential immunity suggests that the military and USDP want to ensure that their leaders cannot be prosecuted for past criminal offenses.